Article Henry James in Rome posted on this link: http://alovelettertorome.com/2013/07/28/henry-james-in-rome/

a love letter to rome (& italy)

The Protestant Cemetery from THE ITALIAN HOURS by HENRY JAMES

“I recently spent an afternoon hour at the little Protestant cemetery close to St. Paul’s Gate, where the ancient and the modern world are insidiously contrasted. They make between them one of the solemn places of Rome – although indeed when funereal things are so interfused it seems ungrateful to call them sad. Here is a mixture of tears and smiles, of stones and flowers, of mourning cypresses and radiant sky, which gives us the impression of our looking back at death from the brighter side of the grave.”

“The cemetery nestles in an angle of the city wall, and the older graves are sheltered by a mass of ancient brickwork, through whose narrow loopholes you peep at the wide purple of the Campagna. Shelley’s grave is here, buried in roses – a happy grave every way for the very type and figure of the Poet. Nothing could be more impenetrably tranquil than this little corner in the bend of the protecting rampart, where a cluster of modern ashes is held tenderly in the rugged hand of the Past. The past is tremendously embodied in the hoary pyramid of Caius Cestius, which rises hard by, half within the wall and half without, cutting solidly into the solid blue of the sky and casting its pagan shadow upon the grass of English graves – that of Keats, among them – with an effect of poetic justice.”

“It is a wonderful confusion of mortality and a grim enough admonition of our helpless promiscuity in the crucible of time. But the most touching element of all is the appeal of the pious English inscriptions among all these Roman memories; touching because of their universal expression of that trouble within trouble, misfortune in a foreign land. Something special stirs the heart through the fine Scriptural language in which everything is recorded. The echoes of massive Latinity with which the atmosphere is charged suggest nothing more majestic and monumental. I may seem unduly to refine, but the injunction to the reader in the monument to Miss Bathurst, drowned in the Tiber in1824, “If thou art young and lovely, build not thereon, for she who lies beneath thy feet in death was the loveliest flower ever cropt in its bloom”, affects us irresistibly as a case for tears on the spot. The whole elaborate inscription indeed says something over and beyond all it does say.”

“The English have the reputation of being the most reticent people in the world, and as there is no smoke without fire I suppose they have done something to deserve it; yet who can say that one doesn’t constantly meet the most startling examples of the insular faculty to “gush”? In this instance the mother of the deceased takes the public into her confidence with surprising frankness and omits no detail, seizing the opportunity to mention by the way that she had already lost her husband by a most mysterious visitation. The appeal to one’s attention and the confidence in it are withal most moving.”

The whole record has an old-fashioned gentility that makes its frankness tragic. You seem to hear the garrulity of passionate grief.” 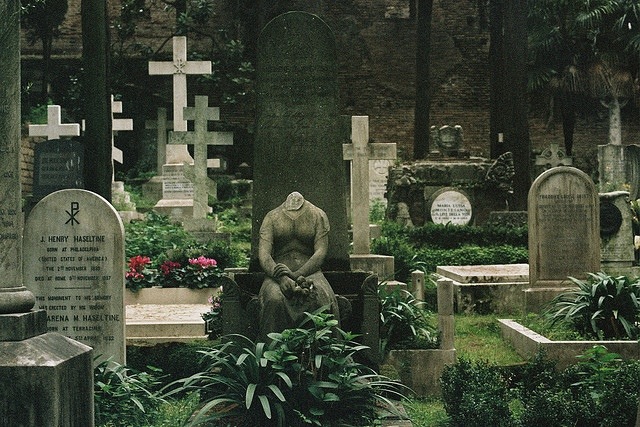